Home English The wheat and the chaff – Holsaby
English

The wheat and the chaff – Holsaby

On May 8, the finale of Kaf en Koren (Wheat and Chaff) took place. Kaf en Koren is an annual musical competition in which starting student bands go up against each other to see which band is the best. In anticipation of the final evening at pop stage Merleyn, ANS interviewed the three finalists. This time: winning band Holsaby.

In 2012, the alternative pop/rock band Holsaby started as a cover band, playing songs within the genre of “farmer’s rock”. After four years, the band decided it was time for a more urban approach to their music, so they switched to writing their own songs, inspired by, among others, De Staat and the Editors. The band is from the Ravenstein area and consists of Sjouke Meerdink (singer and guitarist), Jesper van Griensven (drummer and singer), Kevin Kuijpers (guitarist), Thomas van den Boogaard (keyboard player and singer) and Gijs van Wijlen (bassist). Performing their own music, the band has played at culture stage the Groene Engel in Oss and musical festivals Open Errup and Rock op de Keien. This year, they recorded and published four songs, the most recent one being the song Can’t See You No More. ‘Our songs are a real sensation when performed live’, Thomas says. 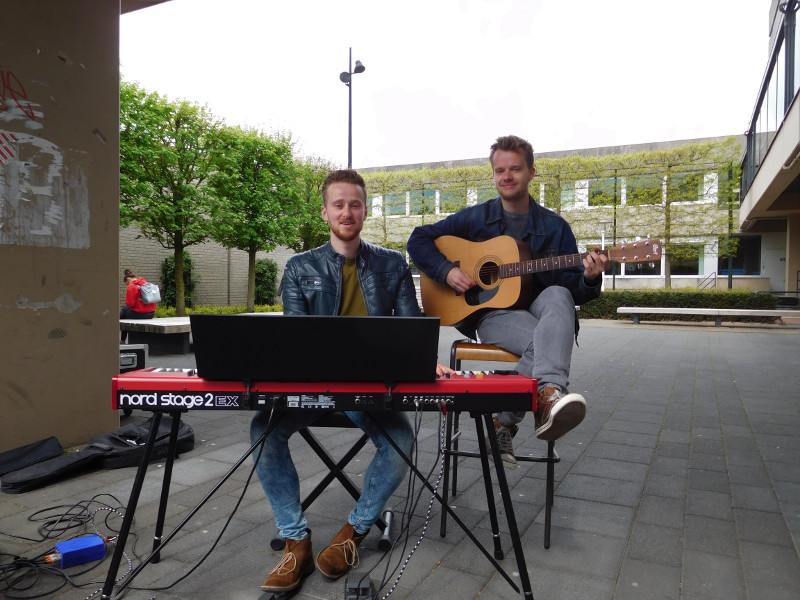 Why have you decided to perform your own music instead of covers?
Sjouke: ‘We got bored with playing covers. At home, I had already spent quite a lot of time writing songs, so it seemed cool to try my own texts with the band. Eventually, I introduced the idea to the group, and we switched to performing our own music.’
Thomas: ‘It took a while before we played our own songs to the outside world. I believe we had the first samples for a year before we finally decided to focus solely on our own songs.’
Sjouke: ‘After we definitively made the decision, we also looked for another band name.’

How did you pick the name Holsaby?
Sjouke: ‘This one evening, we were playing a shooting game, in which you have to enter your name to compete. Everyone was talking loudly and pressing random buttons, when a word sounding close to “holsaby” appeared on the screen.’
Thomas: ‘It also doesn’t have a meaning in any language. It is our own language. If you enter our band name into Google, provided that it is spelled correctly, you will immediately find everything about our band.’
Sjouke: ‘It is not a very artistic story, but this is how it happened. The best ideas are often created during an evening of drinking beer.’

How would you describe your music?
Thomas: ‘Our music is actually hard to place. Personally, we often describe it as alternative rock and pop, with a bit of indie.’
Sjouke: ‘That is because our songs are not all the same. We consciously try to have some variety in our songs, for example by using different elements from various genres.’
Thomas: ‘Our latest song, Can’t see you no more, might even be slightly like a dance song and has something of an eighties vibe. I personally like using psychedelic sounds.’
Sjouke: ‘Every song has its own influences from other bands, like De Staat, Kensington or Coldplay. We are still busy developing our own distinctive sound.’
Thomas: ‘I think we are one of those bands that you have to see live. I am often told that our music is a lot more energetic live than on our recordings.’

How do your songs come about?
Sjouke: ‘We tend to start with a melody, and a particular feeling will suit that. Sometimes I already have some phrases on paper which I will use, but it is not like I have the entire text written down beforehand. Jesper and I both write separately and we combine our lyrics later on. This could for example result in his text being the chorus and mine the verse. This way we get nice variations and it will always be a song from the entire band, not just from one person.’

What are your plans for the future?
Sjouke: ‘We are really looking forward to the Kaf en Koren finale and we are curious to see what ends up happening. Apart from that, it is important for us to expand our setlist with more of our own work.’
Thomas: ‘I do not think we are really the planning types. We sign ourselves up for band competitions without really thinking about it for a very long time. Other than that we will just keep making music and steadily rehearse every week.’

Studying underneath a blanket